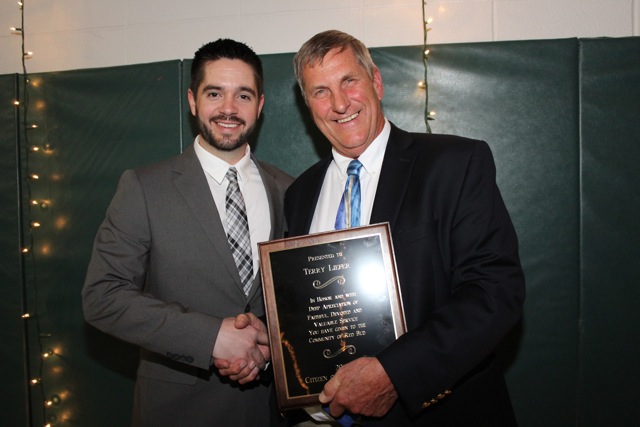 Congratulations to Terry Liefer who was this year's Citizen of Achievement. Terry was awarded this honor at the Annual Chamber Dinner on March 7th, 2015.

Terry has lived in Red Bud his whole life and has always supported the local area. He has been married to his wife for the past 42 years and together have three children. He attended RBHS and graduated in 1970. He soon after joined his family's farming business directly out of school and incorporated the farm with his brother in 1982. They grew the farm to nearly 2,500 acres and most recently to accomodate his brother's retirement, he purchased his portion of the farm and currently owns it with his son.

One of his most notable civic involvements was his supportfor the local Red Bud School District. He was elected in 1982 and served three terms from 1982-1996 with half of those years being chairman of the board.

From 1982-2011 he was on the board of directors for Gateway FS and was a strong supporter of bringing Gateway FS to Red Bud. From 2000-2004 he served on the Bi-County Regional Board of School Trustees in Randolph and Monroe County and in 2002 he served on the First State Bank Board of Directors.

From 1995 to present he has been very involved with helping decorate and collecting at the square for the Red Bud Beautification Committee which his daughter is currently a director for. He has helped the Chamber of Commerce by donating his time to help with building the Chamber of Commerce trailer and stage. He has been a member of the North County Country Club from 1970 and is a big Musket supporter.

Terry Liefer and his wife Justine are the first couple to both be named as Citizens of Achievement. Justine was honored with the award in 2002.