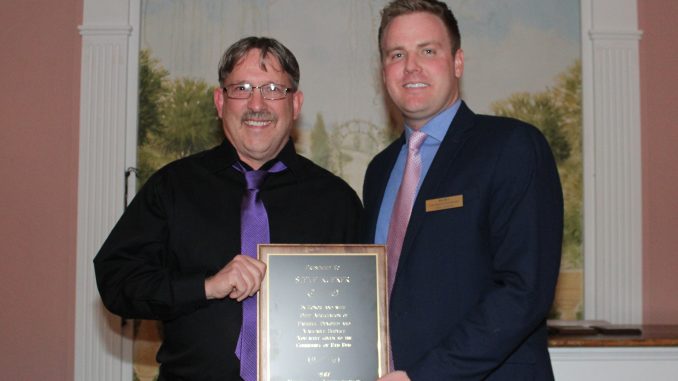 It is a high honor to be named the Red Bud Citizen of Achievement and as such, the announcement is always the highlight of the Red Bud Chamber of Commerce’s annual dinner.

Stenzel read the following about Kueker:

“This year’s Citizen of the Year was born in 1959 and lived the first two years of his life in Prairie du Rocher. His family then moved to Ruma ,and in the spring of 1977 he moved with his parents and three younger siblings to Red Bud.

“As a proud member of the Red Bud High School Class of 1978, he played baseball, basketball and golf. The highlight of his baseball career was pitching a no hitter his senior year. He still likes to go back to the high school and admire the baseball displayed in the trophy case. Of course, he never fails to rub it in to his son that his dad has done something that he’s never done.

"Prior to settling into his current career, he worked such jobs as pumping gas at Texaco and Standard, working at the Red Bud Country Club and loading packages for UPS. After working towards a business degree at Southern Illinois University Carbondale, he landed a job at North County Savings and Loan making $3.30/hour. He is now CEO of North County Savings Bank."

Stenzel noted that over the years, Kueker has been very active in the community. This includes: 12 years serving on the Red Bud Chamber of Commerce Board of Directors, 12 years serving as treasurer for the Chamber, five years on the North County Country Club Board of Directors, two years serving as secretary of the North County Country Club, golf tournament chairman for the country club for 10 years, a Musket member since 1986, Musket head coach for eight years, Red Bud Khoury League manager and/or coach for eight years. St. John's Hornets basketball coach for four years, timer for the Red Bud High School football Musketeers for 30 years, timer and official scorer for the Red Bud High School basketball Musketeers for 30 years, member of the Red Bud Lions Club, served on the committe for the Red Bud High School development, helped with charity work for St. John's School and Church, ran the St. John's charity golf tournament for three years, served on the St. John's Church and School finance committee, and served as treasurer for RBM.

"He and his wife, Dawn, have been married for 21 years and have a 16 year old son, Alex. In his spare time he enjoys old reruns of 'Andy Griffith' and 'All in the Family.' He also enjoys golfing, fantasy football, fantasy baseball, fantasy golf...actually, just about anything fantasy. He also enjoys playing cards, watching Alex play golf, basketball and baseball for the Red Bud Musketeers. He is an avid follower of the St. Louis Cardinals, Blues and of course, his beloved Oakland Raiders."